Book Direct with the Owner at Ningaloo Blue Dive with Townsville Tourism in Exmouth, for all your Attraction and travel needs.

Ningaloo Blue (also known as Sea Venture Charters when working out of Two Rocks WA) are a team of dynamic professionals who aim to make your fishing experience a day to remember!

Our charters depart from the West side of the cape, leaving from the Tantabiddi boat ramp. The deep cobalt blue water we fish from here truly is a fisherman\'s dream playground! Due to the continental shelf being situated a short distance from shore, there is very little travel time before reaching our fishing destination and the fish out there are AWESOME! Exmouth has been long regarded as one of Western Australias prime game fishing destinations. Situated on the Ningaloo Reef, the largest fringing coral reef in Australia, it is the only large reef in the world found so close to a continental land mass; about 100 meters offshore at its nearest point and less than seven kilometers at its furthest.

From game species such as Marlin, Mackerel and Sailfish to delicious table fish such as Red Emperor, Gold Banned Job Fish, Cod and Snapper they all frequent the waters of the Ningaloo Reef! How lucky are we!

Join us for a memorable days fishing aboard Venture III fishing the abundant waters of the Ningaloo Reef! Contact us today to tailor a package to your needs including accommodation and other tours! 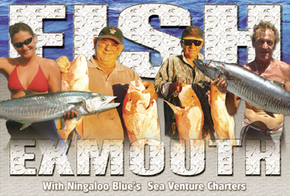 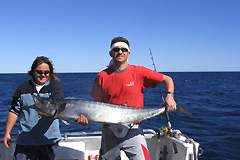 Townsville Tourism welcomes Ningaloo Blue Dive in Exmouth WA, we offer an experience that takes you on a journey of a life time in Exmouth. For all your attraction and things to do, book your adventure today.

Is Ningaloo Blue Dive in Exmouth your property on Townsville Tourism, please claim your listing and subscribe to update your contact details and receive your phone calls and emails from your clients.